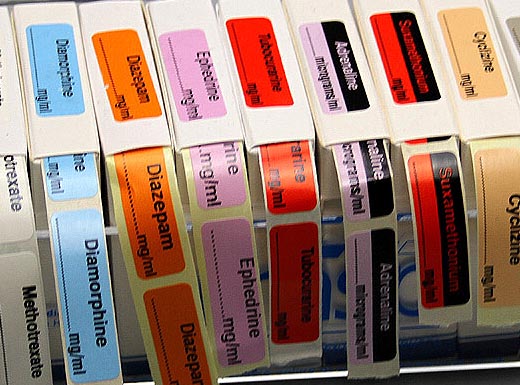 Syringe Labelling in Critical Care areas is an important job for hospitals, it can prevent carelessness on wards and save lives. Dr John A Carter, Chairman of the Safety Committee for the Association of Anaesthetists of Great Britain and Ireland published a document detailing how certain drug types, and in some cases, how some individual types of drugs should be labelled.

The Syringe Labelling in Critical Care Areas Update document outlines the requirements in detail however the below examples list some of the most important requirements.

‘Adrenaline’ is to be used, not ‘Epinephrine’ (similarly ‘Noradrenaline’, not ‘Norepinephrine’).

All lettering to be black with the exception of the labels for Suxamethonium and Adrenaline which shall be printed against the background colour as bold reverse plate letters within a black bar running from edge to edge of the upper half of the label, the rest of which shall display the coloured background.

To denote a drug of opposite action, 1mm wide diagonal stripes of the designated colour, alternating with a 1mm wide white stripe is used. The stripes should run from lower left to upper right at approximately 45 degrees. The striping should be omitted behind and below the drug name. Protamine, as an antagonist of Heparin, should be a white label with black stripes.

The syringe label for this group of drugs should have the background colour Salmon 156, which is shared by the major tranquillisers.

An exception to this is the label for Propofol with user-addition of Lidocaine. This label should read ‘Propofol/lidocaine’ with ‘mg/ml’ for Propofol against the induction agent background (yellow).