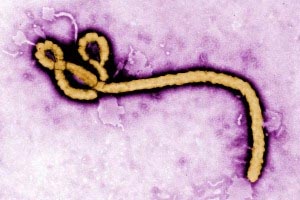 Ebola virus disease is a serious, usually fatal, disease for which there are no licensed vaccines or treatments. The disease was first identified in Africa in the mid 1970s. It is thought that the Ebola virus has been living harmlessly in fruit bats for many years, building up in this population and spreading to other forest animals including chimpanzees and gorillas. It is likely that the virus makes its way into people after they butcher or handle dead animals contaminated with the virus. The current outbreak which was identified in March 2014 is the most serious case so far. There have been 1,000 recorded deaths from the disease in August 2014 in countries such as Guinea, Liberia, Sierra Leone and Nigeria.

Currently, there have been no cases of Ebola in the UK and it remains a low threat. Experts studying the virus believe it is very unlikely the disease would spread within the UK even if it arrived in the country. The likelihood of catching Ebola in the UK is considered very low unless you have travelled to a known infected area and had direct contact with a person with Ebola symptoms, or had contact with an infected animal or contaminated object.  While it is possible that someone infected with Ebola could arrive in the UK on a plane, the virus is not as easily transmitted as a respiratory virus such as influenza. The UK has a world class public health system with the trained staff and facilities necessary to contain cases of Ebola.

Ebola victims do not become infectious until shortly before they develop symptoms. The disease then progresses very rapidly. This means infectious people do not walk around spreading the disease for a long period. It typically takes 5-7 days for symptoms to develop after infection, so there is time to identify people who may have been exposed, put them under surveillance and if they show symptoms, quarantine them. You cannot catch Ebola through social contact or by travelling on a plane with someone who is infected, without direct contact with the blood or body fluids of an infected person.

What are the symptoms?

An infected person will typically develop a fever, headache, joint and muscle pain, sore throat and intense muscle weakness. These symptoms start suddenly, between 2 and 21 days after becoming infected, but usually after 5-7 days.

Diarrhoea, vomiting, a rash, stomach pain and impaired kidney and liver function follow. The patient will then start to bleed internally, and may also bleed from the ears, eyes, nose or mouth. The Ebola virus disease is fatal in 50-90% of cases. The sooner a person is given care, the better the chances they will survive.

How is it treated?

At the moment there is no specific treatment or licensed vaccine for the Ebola virus, although potential new vaccines and drug therapies are being developed and tested.

Patients need to be placed in isolation in intensive care. Dehydration is common, so fluids may be given directly into a vein. Blood oxygen levels and blood pressure need to be maintained at the right level and body organs supported while the patient’s body fights the disease and any other infections are treated.

What to do if you think you may have the Ebola disease in the UK?

If you feel unwell with symptoms such as fever, chills, muscle aches, headache, nausea, vomiting, diarrhoea, sore throat or rash within 21 days of coming back from Guinea, Liberia or Sierra Leone, you should stay at home and immediately call 111 or 999 to explain that have you recently visited West Africa. These services will provide advice and arrange for you to be seen in a hospital if necessary so the cause of your illness can be determined.

There are other illnesses that are much more common than Ebola such as flu, typhoid fever and malaria that have similar symptoms in the early stages.

To find out further information on the Ebola virus disease please visit the NHS website.